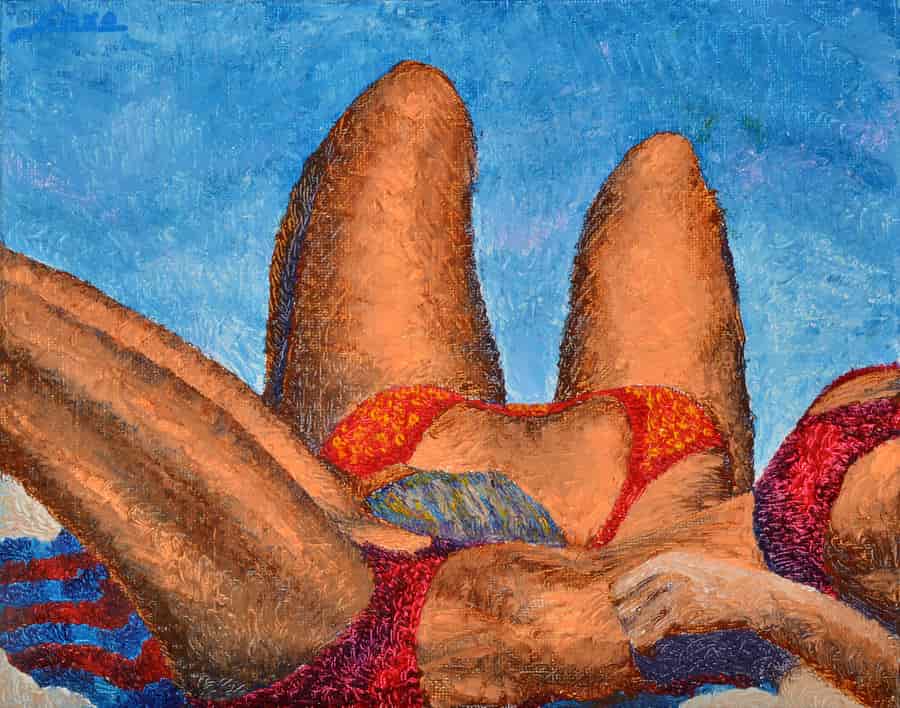 Tall and stylish, with a ready wit and an open manner, Ms. Minter works from photographs reconfigured in Photoshop, creating illusionistic canvases of body fragments awash in bling. Jewels and liquid gold spill out of open mouths. Lips and tongues press against image surfaces. Silver beads morph into droplets of water that are sprayed across paintings as big as billboards — a format she has used twice. Upping the game, a fragment of a 2009 Minter video, “Green Pink Caviar,” will soon light up the Jumbotron screen on the interior facade of the Barclays Center in Brooklyn. It focuses on an enormous, disembodied mouth slurping up variously colored goo. Eros is definitely on hand.

Although she has said that she is in many ways an abstractionist, and insisted to me, “I never tell people what to think,” the pleasures of Ms. Minter’s work are grounded in the bodies of women. And many in pop culture are cheering her on. Madonna used “Green Pink Caviar” for a projection in her recent concert tour. When the survey exhibition now at the Brooklyn Museum opened in Houston, Beyoncé tweeted about it.

The attention is reciprocal, if wary. Earlier in her career, Ms. Minter drew from commercial print sources, including pornography, and some of her work has gone back into the mass media. She produced a 30-second television ad for a 1990 gallery exhibition (it ran on “Nightline” and the David Letterman and the Arsenio Hall shows), and, more recently, she accepted commissions from Playboy magazine and the fashion designer Tom Ford. The last two didn’t really work out; as much as she is interested in such crossovers, her purposes are those of an artist. She likes things that are disfavored. (Ms. Minter, 68, said she took on the Playboy project as an opportunity to celebrate pubic hair, which, she was disheartened to learn, a number of young women were lasering away. Her enthusiasm wasn’t fully shared by the editors.)

Although she treats some of her photographs as free-standing artworks, Ms. Minter’s primary mode, and strength, is painting. Working with a half-dozen assistants, she applies layer upon layer of thinned enamel paint, which is daintily swept with brushes and patted with fingertips onto metal support surfaces using the “cobbled” Photoshopped images as guides. It is a process that takes up to two years — and, she notes, involves no airbrushing. Bill Arning, the co-curator (with Elissa Auther) of the survey, is the director at the Contemporary Arts Museum in Houston, where it originated, and recalled that during its run there, a Rubens exhibition was on view at a museum nearby. “If I wanted to explain Minter’s studio practice,” Mr. Arning said, “I could point across the street.”

An early supporter of Ms. Minter’s work, he noted that a great deal had changed for gender politics since the show was conceived, when “young women thought the questions Minter’s work raises” — about women taking control of how their bodies are seen — “were academic, art-historical issues that had been worked out.”

A still from the 2014 video “Smash.”CreditMarilyn Minter, via Salon 94, New York and Regen Projects, Los Angeles
The recent presidential campaign has helped move feminist concerns into mass culture — and, it seems, generated new enthusiasm for the license she takes.

The earliest works in the survey at the Brooklyn Museum are a series of noirish black-and-white photographs taken by Ms. Minter when she was still in school. They show her mother smoking in bed, or seated at a vanity applying makeup; in all, she either looks at herself in a mirror, or straight at the camera (and her daughter behind it). The artist, who was born in Shreveport, La., in 1948 and grew up in Louisiana and Florida, describes her mother as a drug-addicted Southern belle and her father, who left the family when she was 8, as a gambler and compulsive womanizer.

But she is leery of being seen in light of her background. “Everyone likes the idea of dysfunctional families,” she said, “especially for women artists.” She didn’t exhibit these photographs until 1995. Still, she said she accepts the enduring importance to her work of themes they introduce: grooming and preening, glamour and its fault lines.

Ms. Minter didn’t linger on this material. Shortly after, she began to shoot her own photographs. As her work’s size and degree of enlargement grew, the imagery slid past raw candor to the edgeless realm of libidinal imagination. Digital manipulation allowed for further departures from the real.

As before, only fragments of bodies are shown; Ms. Minter pointed out that she has never pictured a full figure, or a clothed one. Nor does she depict outright violence or abjection. Lipstick is vivid, eye shadow lavish and abundant. But so are blemishes: freckles, pimples, stray hairs. Armor-thick toenail polish is chipped; feet are wet and dirty. The way the models are staged and shot challenged commercial photography and also circled back into it. “We didn’t know — this was back in 1993 — that the fashion industry would put jewels very delicately into the models’ mouths,” she said. “I would cram them in until they started gagging, and that’s when I started shooting.”

In the video “Smash” (2014), a pair of feet strapped into jeweled, silvery high-heeled sandals stomp their way through viscous silver liquid and shattered glass to a percussive soundtrack. This appalling, mesmerizing production required cutting-edge (and expensive) equipment, and it paid off. Mr. Arning explained, “She’s always aware of what time it is in the culture.”

A series of new paintings at Salon 94 is based on photographs of women behind steamed or frosted panes of glass, some beaded with water. You can practically feel them sweat. In bringing us close enough to see these details, she makes us engage intimately — maybe uncomfortably so — with her subjects. It’s a lesson in private pleasure and public display.

In the 1970s, when Ms. Minter’s career began, a great many feminist artists were taking their clothes off — for photo-based activist and conceptual work, for performances and for paintings. When women got dressed again in the following decade and turned to the cooler modes of image appropriation and media critique, Ms. Minter instead raised the heat. In the splintering women’s movement of the 1980s, “sex-positive” feminists — those who believe that women’s sexual practices and fantasies, in all their variety, should be celebrated rather than policed — tangled with a wave of antipornography activists.

Ms. Minter has become a paragon for younger artists who came up with internet pornography and naked selfies circulating on social media. They also have had the benefit of work by Hannah Wilke, Carolee Schneemann and A. L. Steiner — all models for taking control over their bodies, and having pride in them.

Men come into this picture too, as Ms. Minter was quick to point out. She cited — perhaps surprisingly — Jeff Koons (“he’s a great artist!”) along with Robert Rauschenberg and Gerhard Richter, Mike Kelley and Richard Prince. “These are people that moved the dial,” she said.

But she also hastened to credit female peers: Cindy Sherman, Laurie Simmons, Rosemarie Trockel, Sarah Charlesworth, Louise Lawler. She might have added, for their gender-bending and boundary-crashing as much as their materials, the glittery sculptures of Lynda Benglis and Thomas Lanigan-Schmidt, the sequined paintings of Mickalene Thomas, Catherine Opie‘s photographs of Elizabeth Taylor’s jewels and makeup. Welcoming all earnest attempts at perfect bedazzlement, and embracing, with fanfare, the effort’s futility, Ms. Minter insists only on taking the risk.